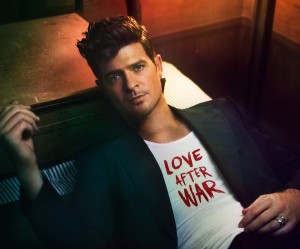 Here’s a short and quick gem from Robin Thicke’s fifth studio album ‘Love After War’. The mission Thicke speaks of is sex-related, but how he sings about it and how it’s actually done is simplistic, yet well-crafted. Since his first single “When I Get You Alone” debuted back in 2002, Robin has been known for his sex-inspired music. Unlike other R&B unmentionables though, Thicke always does it with a degree of class, sensualism, and desire that you just can’t ignore. After hearing ‘War’s first single “Pretty Lil’ Heart” (feat. Lil’ Wayne), I was skeptical about the tone of this album. But with a few listens, the 2012 Thicke is just as great now as he was ten years ago. Listen and download “Mission” below: