In the world of reality television, American Idol is the premiere choice show, and it’s been that way for eleven seasons. The Voice, X Factor, and all other imitators always pale in comparison to the likes of talent showcased on Idol. With the current season down to its final four contestants, media critics and bloggers alike have constantly praised Joshua Ledet’s vocal performances week after week on the Idol stage. Even the three current judges have been wowed by Joshua’s pure, raw talent and unsurpassed vocal ability – especially for a show featuring solely unsigned artists. With Ledet’s vocal praises and accolades being voiced by celebrities, show viewers, and non-fans alike, could Joshua Ledet be the greatest voice to ever grace the Idol stage? And further, is he really the “male version of Fantasia” aka #mantasia?

For me, the answer to this question is a teeny tiny yes, but he’s definitely very close to the other Idol greats. I was first blown away by Joshua’s rendition of Christina Perri’s “Jar of Hearts”. This performance, showcased during the third Hollywood round, is an unmatched vocal compared to anyone that’s been on the show. His deep, soul-stirring voice gave me chills and tears alike, and that usually doesn’t happen – especially from me.

Joshua’s performanceof the Badfinger classic “Without You” (also notably covered by Mariah Carey) also stands as one of the best Idol performances of the season, and even all time. His ability to take a song by a successful singer and completely turn it into his own rendition makes him a true artist. A lot of artists often work for months or even years to come up with a rendition similar to Joshua’s “Without You”, but he was able to create it in only a few days.

With the exception of one, every single J.Ledet performance has rightfully earned a standing ovation from all three Idol judges, another first in the series. But when I look back at Carrie Underwood’s performance of “Alone”, Jennifer Hudson’s “The Circle of Life”, Clay Aiken’s “Bridge Over Troubled Water”, or even Fantasia’s “Summertime” renditions, a small part of me feels that Joshua may not be the best. For the sake of season 11, Joshua’s only real competition (Skylar Laine) was eliminated two weeks ago. But for now, Joshua Ledet is (at least) within the top 10 Idol contestants of all time. Could Joshua Ledet win American Idol and become “the best” singer to grace the series’ stage? 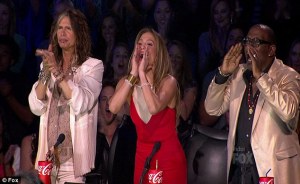