With this week, it’s been made officially clear that 18-year-old Angie Miller is the clear front-runner of season 12. Boasting two themes again this week, there was no room for error despite each of the other contestants making several. The first round is the Contestant’s Choice, where they pick one of their favorite songs of all-time. The second round is the AT&T Pick – One-Hit Wonders. Of the four songs, only one is a one-hit wonder, with the others as very questionable selections by the contestants and the judges. The contestants also visited the Children’s Hospital of Los Angeles, spreading inspiration through song to both the children patients and the hospital’s employees. Either way, the Top 4 night proved to be one of the most exciting nights of the season.

ROUND ONE – CONTESTANT’S CHOICE
Angie Miller – Jessie J’s “Who You Are”
Grade: A

Angie took the route towards introducing music to the children at the hospital and even played on her signature piano. Angie returns to the piano this week to sing Jessie J’s classic “Who You Are”. The first verse is sung absolutely perfectly. She gives the camera a straight eye as she belts Jessie’s songwriting to absolute perfection. With a brand new piano, Angie brings the most emotion to the Idol stage that we’ve seen in months. After a climatic chorus, Angie ends the song with a beautiful note that truly pierces your soul. #inittowinit

Quote: “There is no one that compares to you when you are behind the piano – no one, baby girl.” (Nicki Minaj)

Candice goes on her hospital visit by herself and meets fans of all backgrounds. She praises how strong they are given their health situations and proceeds to play hide-and-seek with her two favorites. After gushing about meeting Drake, she belts a downtempo version of “Find Your Love”. The arrangement works with her voice very well, and she sings Drake’s songwriting like she’s “reading the phone book” (Randy’s second favorite quote). The low-energy chorus isn’t as catchy as his version, but she still gives the song a new, Idol-like spin. In all honesty, I could’ve did without the background singers, as Candice’s voice is powerful enough to stand solo.

Quote: “The vocals were crazy good – that’s the easy part. But know that every phrase doesn’t need a run.” (Randy Jackson)

Kree Harrison – Susan Tedeschi’s “It Hurt So Bad”
Grade: B

Kree gets a moment with the music coach and visits premature babies. Along with the mother of one of the premature children, Kree has a genuinely sensitive moment that gets very emotional. Kree takes on a traditional blues-meets-western version of “It Hurts So Bad” and delves into her adult contemporary side. With her hips swaying in her skin-tight leather pants, Kree seems like she’s really struggling with the power ballad, and doesn’t hit the notes as perfect as she usually does. She also stays in one part of the stage throughout the whole performance, which nearly puts me to sleep. The vocals are always there, but it’s just not enough at this stage in the competition.

Quote: “I did feel you on certain sections where you had a free-spirited moment onstage.” (Mariah Carey)

Amber Holcomb – Celine Dion’s “The Power Of Love”
Grade: B

Amber’s visit with Angie to a children’s hospital was really special. She discusses her song choice and even makes a few fans (since she doesn’t have any). Taking on Celine Dion, Amber starts off a cappella with huge hair and even bigger (ill-fitting) bell-bottoms. The #powerballad works well initially for her, but begins to get sleepy towards the addition of the audio arrangement. She’s obviously out of breath, and for once I feel as if she’s chosen a song that’s way too big for her. The end note makes up for a boring show-opener, but doesn’t work well for her overall.

Quote: “If ever there was a song that was so tailor-made for your voice, it’s that one.” (Keith Urban)

Angie comes out in a long dress and sparkling eyes and takes on a huge, classic song. Starting off slow, Angie goes for subtlety as she croons each word of the little-known classic. About halfway in, the violin choir adds to her greatness, and the vocal gets stronger and stronger. She ends on a high, Broadway-esque note and undoubtedly delivers the single best performance of season 12.

Quote: “You think classic when you hear a performance like that. Talent galore.” (Mariah Carey) 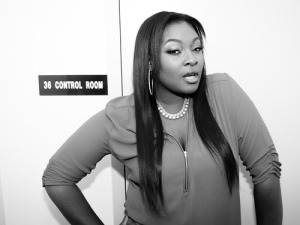 As a song made famous by the Bee Gees and later by Destiny’s Child, “Emotion” is definitely the most recognizable of all the one-hit wonders. Candice relies heavily on the background vocals and gives another subdued vocal performance. There’s no extra high notes or extremities to her performance this time – just crystal clear singing. Instead of over-singing her first song, she should’ve oversang this to make its impact on voters more prevalent. After revealing that she’s very sick, you can really tell she wasn’t doing her best tonight.

Quote: “You took your time with it and really let it marinate.” (Randy Jackson)

First thing – Amber’s outfits are absolutely tragic this week. She looks like a Forever 21 model, and that’s definitely an insult for a high-budget television show. “MacArthur Park” isn’t an easy song to sing on any accounts, but she sounds much better than her first pick. She also takes on a few dance moves as she flirts with the orchestra band accompanying her vocals. The middle of the song drops in terms of excitement, especially when she’s drowned by the violins.

Quote: “It’s like summer has set in for you, and it’s here to stay.” (Keith Urban) 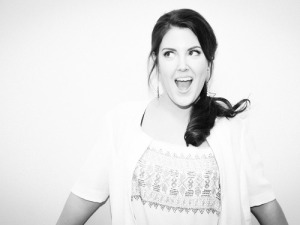 I’ve never heard of this song before, but Kree commands it from the very first note. There’s something about her vocals that are undeniable, even if she bores me to tears. Each of the other contestants have progressed in terms of their overall performance factor, but Kree seems to be undergoing a slight decline. Still, she takes “A Whiter Shade Of Pale” to new heights with big (but questionable) notes. Maybe she’s finally reached her peak.

Quote: “That was a great song, not one of my favorites.” (Randy Jackson) 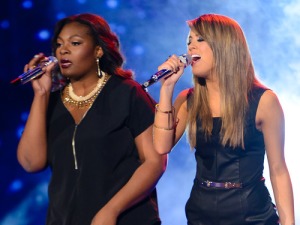 This Candice-Angie is definitely #heavensent. The duo trade verses like seasoned professionals, and the winner is too close to call. Both bring different styles to Rihanna’s “vocals” but Candice definitely turns up the vocals a few notches. Angie holds her own as she hits more soulful notes than she’s done all season.

Quote: “Angie, this vocal performance actually made you a stronger vocalist.” (Randy Jackson)

Amber Holcomb and Kree Harrison – Adele’s “Rumor Has It”
Grade: B 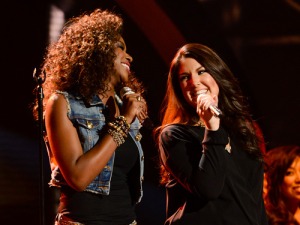 I’ve always Kree to sing Adele and this week I got my wishes. Amber and her trade verses, and again it sounds like Kree is the recording artist while Amber is the reality show contestant. Kree brings so much power to a song while Amber tries way too hard to hit the high notes. During Adele’s epic breakdown, the two have a harmonious moment (“just cuz I said it, don’t mean I meant it”), but Kree definitely steals the show.

Who Should Go Home: Amber Holcomb

Who Will Go Home: #judgessave

Eliminated: No one (Since the judges didn’t use the save, this week’s vote will be combined with next week’s votes).