What do Molotov cocktails, paper planes dropping bombs from the sky, and mystic gravitational pulls have in common? Maya Arulpragasam, commonly known as M.I.A, is a Sri Lankan born beauty whose unique style in fashion, music, political activism, and artistry displays a brilliant mind in today’s ill-inspired environment. Oddly enough, M.I.A got her start in demure London, where she was a graphic designer and hipster. With her modern interpretation of political unrest and civil injustice, M.I.A (the #madamerebel) enlightens pop culture on the struggles of those in Third World countries. Often criticized for her political rants and supposed connections to Sri Lankan terrorists, M.I.A chugs on with the creative engine that is her many talents, which include graphic design, the N.E.E.T imprint (her record label that she refers to as a ‘media company’), and her upcoming, untitled fashion line. When looking from a holistic point of view, one must contemplate this complex being on many different levels from her grunge like style, to the taboo topics of a classist society. At times, M.I.A’s fashions are so unbelievably bizarre, they become hideously beautiful in a naughty girl manner and makes you feel like it’s all wrong while feeling so right – I like to call this #grungebeauty.

When one thinks of grunge, you very rarely equate it with beauty but who could deny this Belle of the Third World her due. The #madamerebel rocks this Marc By Marc Jacobs suit with spunk and pizazz. I especially appreciate the romper tie combo with the greasy hair look. In true Marc Jacobs style, this look is a walking contradiction but still intrigues the senses.

This picture captures M.I.A’s native beauty and is both a cultural and artistic phenomena of her chameleon-like appearances. It appears that no matter the look, M.I.A is able to pull of anything with style and grace. The combination of a hooded sweatshirt and traditional Indian garb is symbolic of the singer’s ability to cohesively combine old world traditions with today’s pop culture.

Here we see Madame Rebel in a scarf worn similar to  Hijab traditional headwrap cultures. However, as always she puts her own spin on the custom fashion tip with the bright neon color that draws attention to the face, neck, and hair – the polar opposite of the garments purpose. M.I.A. also wears several layers of large garments that resemble the Burqah, which is the long flowy garment also seen in traditional Muslim communities. 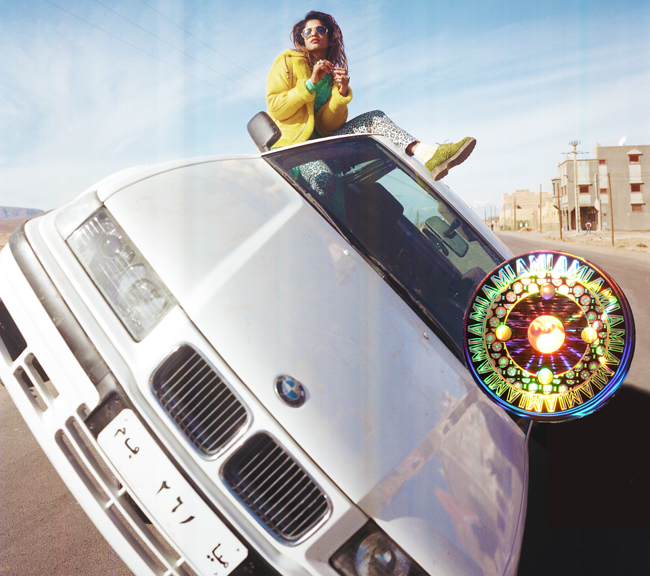 Both photos seen above were taken during the shooting of M.I.A’s latest video for her last studio release titled /\/\/\Y/\. “Bad Girls”, shot in Morroco,  features several Muslim women in traditional dress. These women are covered completely from head to toe yet still somehow captivate you as watch. M.I.A wears her own traditional hodgepodge of styles, cultures, and #grunge beauty. Check out the official video below:

One thought on “[FASHION] Will Work For Clothes – M.I.A.’s Grunge Beauty”