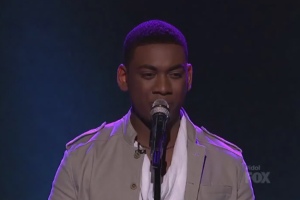 This week, superstar talent Joshua Ledet chose James Brown’s classic “It’s A Man’s Man’s Man’s World” and literally blew America away. Never before in my eleven years of watching American Idol have I ever seen anything like this before, and I doubt I ever willas long as I’m watching singing competitions. Each week, Joshua continues to raise the bar for himself and this week is definitely no exception. To outsiders, performances of this caliber make it seem as if Joshua has already won the Idol competition. Also in weekly tradition are the judges #joshuastandingovation, followed by several minutes of exclamatory vocal praise (see below link for judges comments). With the James Brown cover now serving as one of his best performances on the Idol stage, the judges semmingly agreed:

Randy: “I think this is one of the best performance in the history of any singing show, including ours. Any show. ANY SHOW!”

Jlo: “You’re so amazing, you’re making me speak different languages – that was sickening.”

Steven: “Neither man nor woman has ever sung with that much compassion on this show EVER!”