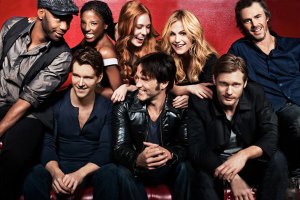 As True Blood season 5 begins tonight, I wanted to take a TUA-style look back at the HBO series’ greatness. Witches, vampires, fairies, and even demons plagued the town of Bon Temps, with everyone’s favorite telepathic waitress surviving each battle. Marnie was my favorite character in the Charlaine Harris books, and I’m glad she received an even better visual treatment. Below are my favorite clips from each episode of season 4, highlighting the penultimate moments of a really epic season. True Blood premiers tonight, June 10 at 9:00PM.


Sookie realizes the implications of Eric purchasing her home while in fairyland.
Eric attacks Marnie and Tara, followed by Antonia’s powers counter-attacking Eric and erasing his memories. (Lafayette to Marnie: “I’d listen to Eric, he tends to get his way!”)


Andy freaks out on Sam while high on V. (Andy to Sam: “I’ll ask the questions here – last time I checked I’s the sheriff, not you!”)
Eric can’t resist the taste of Claudine (Sookie’s fairy godmother) and drains her dry.


Alcide looks for a drunk Eric in the Bon Temps lake behind Sookie’s house.
Marnie (fully possessed by Antonia) casts an incantation spell to stop Pam’s violent advances (Marnie: “Stop saying fuck – I can’t concentrate!”). This is one of my favorite scenes of all four True Blood seasons.


Rev. Daniels and Lettie Mae visit Terry and Arlene to rid their house of demons (Terry: “I like Rev. Daniels – they sing at his church and it’s livelier. And our pastor said he don’t do stuff like this anyway”).
Sookie visits Moon Goddess Emporium for a reading, and discovers that Marnie may not be exactly who she says she is (Sookie: “Lady, when my Gran tells me to run, I run! Keep the change”).


Bill shows sympathy for a memory-derived Eric and spares him from the True Death, against AVL leader Nan Flanagan’s wishes.
While looking for Jason in the woods, Sookie reconvenes with Eric after being set free from Bill’s imprisonment.


Lafayette sees Mavis for the first time, and is not a fan of her French singing.
Marnie-Antonia casts her infamous vampire spell which brings all vampires into daylight, and Jason is barely able to save Jessica.


Mavis’s backstory is revealed, and Lafayette is possessed by her while in his sleep.
Marnie battles the vampires (Marnie to Sookie, after using her powers against the witches: “Demoness!”) and gains control over Eric.


Marnie reaches an amicable solution with Antonia, and she agrees to reenter her body in their fight against the vampires.
Jesus uses his inner demon powers to break through Marnie’s barrier and regain her trust.


Alcide is shocked to discover that Russell Edgington has been freed from his silver cement prison block.
The final battle with Lafayette-Marnie-Antonia/Sookie/Tara/Bill/Eric.