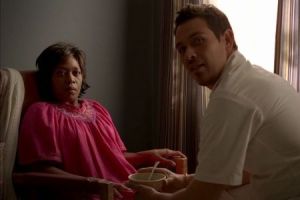 Season 5 of True Blood just got better with the announcement that Alfre Woodard will be returning for at least three episode during the show’s latest season. Woodard plays Ruby Jean Reynolds, the #suspectedmedium mother of Lafayette Reynolds. Her actions in seasons 2 and 3 let viewers know she was mainly delusional and psychotic, but also insightful. She accurately predicted the witch battle behind Sookie’s house almost a year before it happened, and has even told her son about his own abilities. The show hasn’t seen Lafayette do anything major on his own, as it’s always been on someone else’s behest (Mavis, Marnie). Woodard will make her return to True Blood during episode 5 (“Let’s Boot ‘n Rally”) which airs July 8, 2012. Watch one of my favorite Ruby Jean/Jesus/Tara/Lafayette clips below: