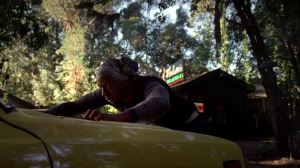 Sookie and Lafayette’s terrors: When Alcide leaves, Sookie tells Lafayete that he knows the truth about Debbie, and Laf curses her as the ‘angel of death’. Sookie attempts to turn herself into Jason, who abruptly refuses. Sookie also tells Jason (and accidentally Jessica) about Tara, which leads to problems controlling her power, hearing the whole town’s disdain with her decision regarding Tara’s fate. Lafayette uses his #demonpower to control Sook’s car, crashing it into a light pole. As always, she barely escapes and goes home to drink Orange Marispuan’s heavily (triple sec/Bailey’s/Amaretto). Lafayette tries to tell her about his actions, but Sook’s too drunk to realize it. Alcide arrives and lets Sook know the Debbie situation was resolved. 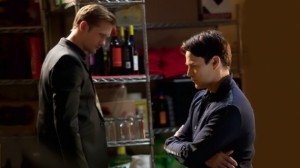 Bill and Eric’s fate: The duo are dropped off outside Bon Temps to find out who broke Russell out. Eric interrogates Pam about know about the Sanguinistas, while Bill learns from Tara about Sookie’s whereabouts. As the duo ponder who else would’ve known Russell’s whereabouts, Bill has Jessica search for a bug in his house. Jessica, after an altercation with Steve Newlin, questions Bill’s status as the king. She also tells Bill about Sookie’s #roughtimes and asks him to go visit her, not before warning her about glamouring too many humans. Bill arrives at Sookie’s, followed by Eric, and they see in full drunken stupor with Alcide, and decide she could be useful in finding Russell.

Pam and Tara coexisting: After attempting to tan herself to death, Pam commands Tara not to commit suicide again. When they return, Pam is questioned about Russell. Pam feels hurt that Eric even thinks such, and asks to be released. The next day, Eric releases her but tells her to keep Godric’s bloodline strong. Afterwards, Pam teaches Tara how to eat properly and that her ancestors make her the vampire #creamofthecrop.

Adventures with Jason and Andy: Judge Clements invites Jason and Andy to #fairyland. Andy finds out the Debbie case was closed, but he still wants to research it further. Jessica glamours Andy to make him forget the entire Debbie case. The three arrive at #fairyland, which is decked out with male and female fairy strippers, and Andy immediately reunites with Maurella, his one night stand from the season four finale. Jason runs into Hadley, who he learns has moved to #fairyland with her son. After revealing vampires killed Jason and Sookie’s parents, he and Andy are escorted out with two male fairies erasing their memories.

The Authority’s traitor: Salome and Roman watch Nora’s continuous torture via webcast. Roman convinces Salome to find out the other Sanguinista conspirators. The chancellors track Bill and Eric’s every move as well as listen to Nora’s prayer to the Sanguinista. Salome and Roman question Nora about the conspirators, specifically within the Authority. Salome swears on the blood of Lilith that she will keep Bill and Eric safe in exchange for the name of the conspirator, but Nora doesn’t budge. After a search of each of the chancellor’s quarters, Roman discovers its Alexander Drew, the appeared 9-year old vampire, and stakes him after an impromptu review of the evidence. 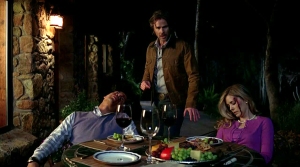 Other Plots: Sam meets up with Suzanne and Emory at Merlotte’s. He arrives that evening for a run with them (like #oldtimes) and finds them both dead – a plot from the 5th Sookie Stackhouse novel ‘Dead as a Doornail’. Alcide tells Gordon and Barbara Pelt about Debbie, blaming the death on Marcus, the deceased Shreveport packmaster. Terry and Patrick go to South Dakota to find Eller. A flashback to the Iraqi war reveals Eller initiating a fire exchange ending with an entire village being slaughtered. The duo find Eller’s underground hideout and are taken captive.

This episode left me very excited for next week’s debacles – mainly, Lafayette’s struggle with his newfound #demonhood. Being a medium is one thing, but also possessing a demon is a powerful thing. Something so powerful that it could eventually affect any of the characters, as seen with Sookie’s car incident during this week’s episode. I’m hoping for flashbacks to Jesus’s brujo grandfather, but for now I’m looking forward to Alfre Woodard’s return to the show next week (see HERE). Otherwise, Salome’s character development intensifies with each episode, making her more and more of a threat. I’m also hoping her and Pam will showdown eventually, but I really don’t think she could handle Salome/Lilith’s wrath. The writers have kept this season suspenseful for a reason, and I’m sure next week’s Angela Robinson (of ‘The L Word’ and ‘Hung’) debut written episode won’t disappoint.

“I wish I could bring my son to you for all his problems, but you ain’t a gynecologist.” (Judge Clements)

“Hey Sam, Barack and Hillary over there are asking for you.” (Arlene)