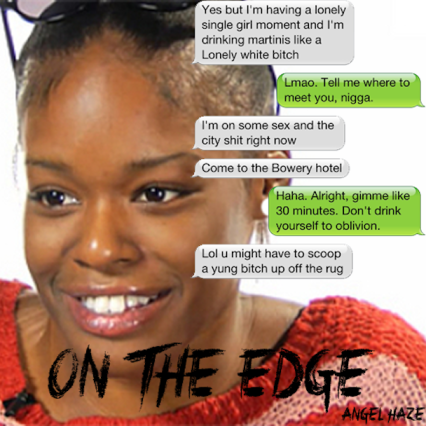 Weeks following the #pressparade surrounding unknown femcee Angel Haze and hip-hop starlet Azealia Banks’s Twitter spat, Haze has released an official apology via her own Youtube channel. The style-deformed male-to-female rapper dons eye shadow, a belly shirt, and women’s jewelry as she’s being egged on by her #hagfag named Eugene in the clip concerning her hateful words towards Azealia. Citing that she “came off as a bully”, the apology comes off more like a comedy than a heartfelt recognition of wrongdoing. Any further words from Angel on the beef would be seen as unbecoming, especially since she was the one who started the war. It’s also contradictory that Angel decided to release two songs in regards to the situation, but I’m sure someone at Republic Records forced her to apologize to save what’s left of her career. For me, the video is a pity cry from Haze only to gain followers who mistakenly believe that she’s the better rapper. Days after the beef settled in the pot, Banks had this to say about Angel’s newfound fanbase:

Looks like Angel Haze got exactly what she wanted out of her Twitter rant – her name in people’s mouths. Watch her and Eugene’s apology below.