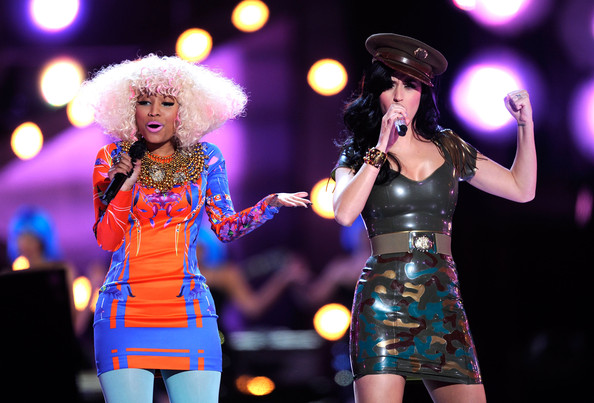 Years before SuperBowl XLIX, Queen of Pop Katy Perry found herself in the midst of an epic performance for VH1’s ‘Salute The Troops’ live concert series. Performing alongside rapper Nicki Minaj, the buxom duo put together a redux of the Cyndi Lauper classic “Girls Just Wanna Have Fun”. Upon a first glance at the headline, it seems as if Nicki doesn’t exactly fit in Katy’s “Girls” cover equation – and she doesn’t. While Katy’s vocal is playful and light-hearted, Nicki’s comes off as extremely timid and awkward on top of her ridiculous styling. But Katy still seems to be having fun throughout their live showing, lending much needed assistance to the on-stage energy between her and Nicki. Around 1:15, Nicki grabs Katy for a runway-esque strut to make up for her poor singing that immediately screams #mallbrowsing to me. At 2:22, Katy and Nicki attempt to harmonize to fatal results – Katy soars high , while Nicki falls flatter than her first verse of “The Crying Game”. I’m not sure whose idea it was to book these two artists together – especially since Perry had just dropped ‘Teenage Dream’ at the time – but this performance has always been quite enjoyable to watch. Hopefully, we’ll get this type of energy (and more) from Katy come Super Bowl Sunday. Watch Katy Perry and Nicki Minaj perform “Girls Just Wanna Have Fun” below.