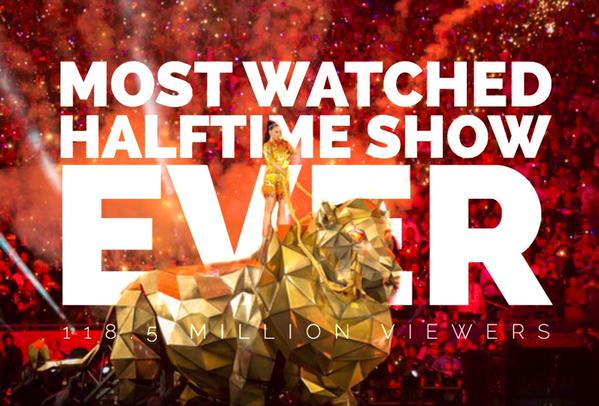 Sunday, February 1, 2015 will go down as the biggest day of Katy Perry’s career – not only for her beloved Katycats, but for the entire world. Ever since Missy Elliott (and Lenny Kravitz) graced the stage during the Queen of Pop’s Super Bowl XLIX half-time show, the Internet’s been buzzing with opinions regarding Katy’s A-list surprise guests. Twitter is the go-to source for all-things in real-time, but the world was even quicker in providing Katy opinions that ranged from good, bad, ugly, and all in-between. But once the numbers came in and Katy’s half-time show reigned supreme as the most watched and successful of all-time, the hating ceased immediately. Seen as somewhat of a double-minority amongst stan wars (I’m Black and a Katycat), the now-legendary performance known as Katybowl will be something that I’ll talk about for many years to come.

https://twitter.com/slaytykaty/status/562436165182029824
On the good reactions: There’s no doubt that Katycats around the world weren’t blown away by the flawless improvements in Katy’s live performances. The one thing can’t be denied is that Katy’s performance was equal parts enjoyable and visually satisfying – for everyone. Pair that with her exceptional changing skills and merchandise sold during the actual game and it becomes a series of firsts for Super Bowl fans. As a superfan of both Katy and Missy, the dynamic of the two on stage together snatched my wig and shipped it to Mexico.

The vocals were much better than usual – especially great during the dramatic opening (“Roar”) and ending (“Firework”) performances. Singing alongside Lenny Kravitz proved to be one of the most epic musical SB musical moments ever, but “sweeping the floor with it” beside Missy made Katy’s performance iconic. Katybowl only showed her fans that she’s capable of being just what she’s aspired to be – one of the biggest pop stars in the world.

On the mixed reactions: There were quite a few people who weren’t as enthused about the NFL’s halftime performer pick for the 2015 show. While they knew of some Katy music, they weren’t as sold on the Queen following in the footsteps of Beyonce’, Madonna, and Bruno Mars. This just gave Katy a bit more to prove in terms of an overall “wow factor”, delivering on every front – vocally, visually, and sexually. The opening mechatronic tiger alongside the surprisingly great “Roar” vocal was a visual highlight, but the segment just before Missy seemed to be the most problematic.

Apparently, the middle section was plagued with questionable vocals and dance moves. The legendary #bendandsnap (from ‘Legally Blonde’) didn’t fare over well, and the entire beachy “California Gurls”/”Teenage Dream” segment came off to some as more campy than creative. What those with mixed reactions failed to realize, however, is that the man under the #leftshark is at the center of the Taylor-Katy beef. In my opinion, this subtle act of brilliant shade trumps all complaints.

I heard Katy Perry was boring last night and missy stole the show. Guess I didn't miss anything.

On the bad and ugly reactions: The biggest complaint regarding Katybowl is that she was “boring until Missy came out and stole the show”. What people are failing to realize here is two things: 1) Katy is incomparable to any artist – Beyonce’ included, and 2) Katy’s show was like no other Super Bowl show in its 49 year history. She’s Katy Perry – not someone who does backflips through rings of fires and steals demos just to recycle them into #1 singles. In the pop world, nevertheless, Katy is referred to as the Queen of Pop, not someone who paid for a performance opportunity.

Beyoncés performance wasn't ALL THAT. She did a great job but it was all about Beyoncé. But y'all love that selfish spotlight diva shit.

But at the end of the day, the biggest issue that plagued #blacktwitter and meme makers was surrounding Missy’s spotlight. So many people thought that Katy was forced to bring out Missy to make her show more interesting, but did you ever think it was just her way of paying homage to a hip-hop legend? The two have worked together twice previously – with Missy as a songwriter on Timbaland’s “If We Ever Meet Again” and as a guest rapper on Katy’s “Last Friday Night (TGIF)” – so seeing them perform together didn’t strike me as shocking.

The good thing for her naysayers is that Katy’s sales (along with Missy’s) skyrocketed after the Super Bowl. She also stands as the first artist in history to sell exclusive merchandise (despite being slightly underwhelming) during and after the actual performance. By the end of “Firework”, Katy literally appeared as if she descended from heaven into every television set worldwide just to say “I’m here, bitches” and slay the stage. The outfits were spectacular, the mechatronic tiger will change the way that any artist after Katy will perform for such a large audience, and the opportunity meant so much to the Queen that she got a tattoo to commemorate her achievement. Love it or hate it, Katy Perry put on one helluva show that will go down in music history as being forever iconic.