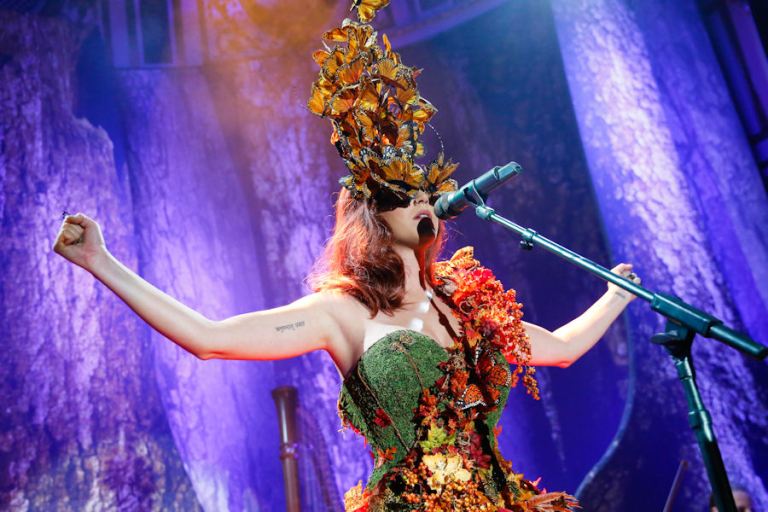 The reigning Queen of Pop Katy Perry may be on the last leg of her epic Prismatic World Tour, but that doesn’t mean that there aren’t more performances in her future. In mid-September, Perry snagged an exclusive headlining slot for ‘Bazaar Icons’, the yearly mini-festival that celebrates Harper Bazaar’s September issue. With Katy also featured on the September 2015 cover of the magazine, it seems like an all-out promotional assault with no album in sight. The ‘Bazaar Icons’ show featured Katy in a fall-esque ensemble alongside a massive, leafy headpiece, the Grammy-nominated singer performed a slew of hits that reminded me of her ‘iHeartRadio’ special for her third album ‘Prism’. Katy’s performance started off with “Roar” and weaved through acoustic/trap versions of “Teenage Dream” (4:52) and “Dark Horse” (12:49). Her vocals are always better during acoustic sets, but a platform like ‘Bazaar Icons’ – which is held during New York Fashion Week – proved to be much more important. Her performance of “I Kissed A Girl” (8:45) was dedicated to Mariah Carey, whom she cites as inspiring “so many of us pop stars”. The best part of the performance, however, begins at 16:48, when Katy props her assistants despite “no longer feeling like a sample size”. Watch Katy Perry’s full ‘Bazaar Icons’ performance below.