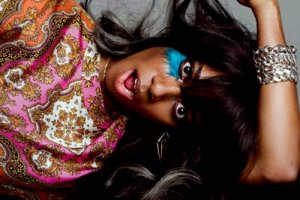 Santigold’s second album ‘Master of My Make-Believe’ is filled with fun, summery pop singles. Since the album’s release, “This Isn’t Our Parade” has been on repeat and remains my album favorite. The song also stands as the only song on ‘Make-Believe” featuring writing from both of the album’s guest writers – David Zitek of TV on the Radio and Nick Zinner of the Yeah Yeahs, along with Santi and longtime producer collaborator John Hill. “This Isn’t Our Parade” rides a soft Caribbean melody over African drums and Santi’s crooner-esque vocals. While speaking on a rocky relationship with someone who may need humbling, Santi exclaims that it’s not their time (or “Parade”) for such antics. Towards the song’s end, Santi’s adlibs become more tribal than rock/pop – one of the things I’ve always liked about her album styles. Most artists are terrified to mix genres together, let alone different cultures, but the Carribean-African connection on “This Isn’t Our Parade” makes the song one of pure genius. Listen and download below.