“No Church In The Wild” 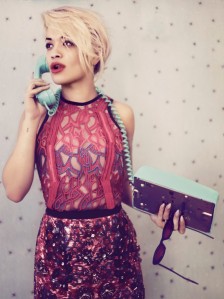 The current princess of the Roc has been shadowed by criticism for her Riri comparisons, so why not cover her mentor’s biggest duet hit as her way of paying homage? Rita Ora’s soulful version of her mentor + Kanye’s “No Church In The Wild” becomes a poignant move for the newly discovered singer. While her version is vocally there, I do have to slightly critique her artistry for not knowing the song. Not only does Rita hold the lyrics, but she also struggles to keep up at times due to reviewing lyrics obviously and repeatedly. Either way, around 3:11 Rita turns up her performance factor, giving just enough to make a “church” of twenty patrons stare in awe. I think her mentor + Kanye would be proud, but I’m sure Frank Ocean prefers his own vocals better. Watch Rita live and download below.

“Somebody I Used To Know”

Rita’s stunning cover of Gotye’s hit single boasts a Beyonce’-type arrangement to outstanding results. His verses are sung effortlessly, each packed with signature runs from Bey’s #IASF days. In all honesty, this is the Rita Ora that Americans will hopefully appreciate, as her British success (radio and single sales alone) surpass her figures stateside. Listen and download below.