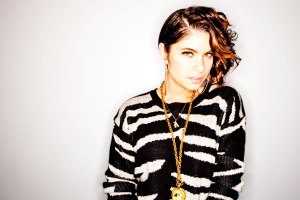 The debut single from pop singer Leah LaBelle comes courtesy of a joint venture with Pharrell (iAMother) and Jermaine Dupri (SoSoDef). After placing 12th on the third season of American Idol (aka Fantasia’s season), her soulful, experienced voice gained her a background spot on Keri Hilson’s ‘Return The Favor’ Tour. The seventeen year old LaBelle gained notoriety by covering urban songs on Youtube until discovered by LA Reid and Pharrell eight years later. As the first end-product of her long rise to fame, LaBelle’s “Sexify” is a smooth, urban soul number that has the feel of both Dupri and Pharrell mid-ninety productions. The song’s official clip also features cameos from both producers, as well as close industry friend JoJo. With its somewhat ranchy subject matter creeping up both mainstream and urban radio formats, Leah may just have one of the ‘songs of the summer’. Watch and download Leah’s “Sexify” below.