Sookie’s troubles: Sookie enlists Lafayette to try to reach Warlow to no results. Lafayette has also been texting Tara and received angry responses each time. Lafayette begins hearing other spirits including Adele (Gran), who tells Sookie that a clue is under where she sleeps at night. An old box of newspaper clippings reveals Bud Dearborn discovered the bodies of Sookie’s parents. Lynn Dearborn (a shifter in the novels) is revealed to be Jason’s sixth grade teacher. Sookie goes to Bud’s to ask about her parents’ death and begins reading his mind. She grabs Bud’s hand to amplify her powers, but Sweetie des Arts (also from the novels) knocks her out. Sookie wakes up hogtied at a farm and also notices Hoyt. Bud, Sweetie, and two #obamas arrive and describe their anti-supernatural views. Sook reads Sweetie’s mind and discovers her true hatred from shifters and anything else supernatural, causing Bud to drug her with oxycontin. After being saved by Sam, the faeries come to her home and tell her that vampires are taking over the world.

Humans/Shifters Vs. The Anti-Vampire Group: Luna refuses to go to the hospital while Sam goes after the #obamas. Jessica is interrogated by Kenya about Hoyt’s possible affiliation with the group, and cries to Jason about potentially becoming responsible for his death. Kevin discovers ‘keepamericanhuman.com’, a site Joe Bob visited over 500 times. The Dragon is revealed as the leader of the anti-vampire group, which leads Jason and Andy to severely beat Joe Bob in an effort to find his identity. Andy unsuccessfully hosts a press conference but becomes silent when he sees Sam and Luna in the audience. Jason and Andy discover Bud is the Dragon by noticing his square dancing shoes, a gift from the entire Bon Temps police department during season three. Andy, Jason, Kenya, and Kevin break into Bud’s house and eventually discover the farm location. Sam, as a pig, sneaks in on the group about to feed Hoyt and Sookie to the real pigs. He catches Sookie just in time, as Andy and the sheriffs arrive and hold the Dragon at gunpoint. Andy fatally shoots Bud just as he attempts to kill Sam, just as Luna (as a wolf) catches and severely beats Sweetie. 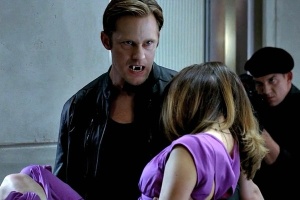 Authority battles: Housed in Houston, the largest TruBlood factory in the United States has been bombed, causing the Authority Sanguinistas to eat on a human with Rev. Steve Newlin saying #grace. Molly tries to escape, but realizes the entire Authority headquarters is #bloodprotected. She meets up with Eric and the two come up with a plan. Eric goes to Bill and tries to talk sense into him, calling his praises to Lilith a really good act. Bill asserts that he believes in Lilith but takes a needle from Eric to steal Salome’s blood for their upcoming escape. Eric talks to Nora and pretends to be faithful towards Lilith’s teachings. Nora reveals Salome snuck her into the Authority to taste Lilith’s blood without Roman knowing. Meanwhile, Bill has passionate sex with Salome, and has visions of both Sookie and Lilith. Eric silvers Nora and uses her blood to open the elevator to escape, only to find Salome anxiously waiting to catch him.

The Ifrit’s Wrath: Terry tries to calm Arlene down after the séance with Patrick, Holly, and Lafayette. He agrees to give Patrick a fair fight, but Arlene continues to beg him to think about their children. The next day, Patrick captures Arlene and makes her call Lafayette to close Merlotte’s for the day. Terry arrives and disarms himself when he hears Arlene in trouble. Patrick and Terry fight, allowing Arlene to stab Patrick and take control of the gun. Arlene begs a hesitant Terry to shoot Patrick, until Zaafira and the Ifrit appear, chanting “do what is right”. Terry kills Patrick, and the Ifrit arrives and takes his body, leaving only a small, manageable pool of blood.

Pam, Tara, and Mainstreaming: Tara takes Tru-Blood off the market as an effort of conservation. Pam, instead of removing it, suggests discreetly feeding on humans when their supply runs out. Tara also realizes Pam is very worried about Eric and tries to console her. Back inside, the bar itself is overflowing with Tru-Blood orders. Pam sees Elijah feeding on a human, and says he’s the new Area 5 sheriff when confronted. Tara and Pam both look puzzled to see that feeding is now a public affair, but also a legal one.

Other Plots: Alcide leaves Bon Temps for Jackson. A flashback to a young Alcide and Debbie reveals his dad explaining the importance of packs as key to all werewolves’ survival. Alcide arrives back in Jackson to find his father, also abjured from his pack. Russell and Steve visit JD  to celebrate his new packmaster status with his blood. Russell takes Emma from Martha and gives her to Steve as a gift. Russell physically threatens JD when he tries to get her back.

“I ain’t Whoopi Goldberg in ‘Ghost’ although I am way prettier.” (Lafayette)

“The last ghost lady Lafayette channeled tried to steal our baby, why should we trust this one?” (Arlene)

“Just because we drank a bitch together does not make us Oprah and Gayle, now get the fuck back to work.” (Pam)

“What about Sookie? Is she just food too now?” (Eric)

“We all fall short somewhere. You use your dick for a compass. Me? I’m just a bad cop.” (Andy)