Katy Perry is not only classified as the ‘Queen of Pop’, but she can finally add the ‘Queen of High Fashion’ to her many titles. Katy’s style has been improving at a rapid fire rate since her #oneoftheboysera days, and lately every major fashion house has taken note. Her public breakups have assisted in upping her style game, but it’s mainly Katy’s essence and artistry that pours into her quirky fashion choices. Below are a few of Katy’s best red carpet looks to date – and they’re so good, they give most other female artists a serious run for their money. 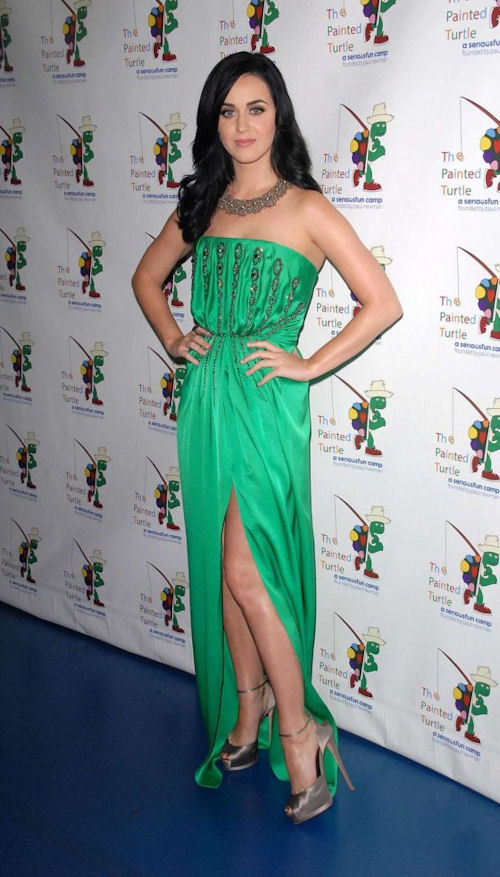 Katy sports a royal green dress with an embroidered bustier to Paul Newman’s The Painted Turtle Camp benefit. The sand brown pumps and anklets give the dress a universal appeal, one that can be worn during almost any season (Dress: Yves Saint Laurent Edition Soir).

At Clive Davis’ 2013 Pre-Grammy Gala which honored L.A. Reid, Katy goes for an all-over pearl effect that works wonders for her perfect figure. Her light makeup and #hollywoodglamour hair shines brightly on the red carpet and could fit on any Vogue or Elle cover (Dress: Rafael Cennamo). 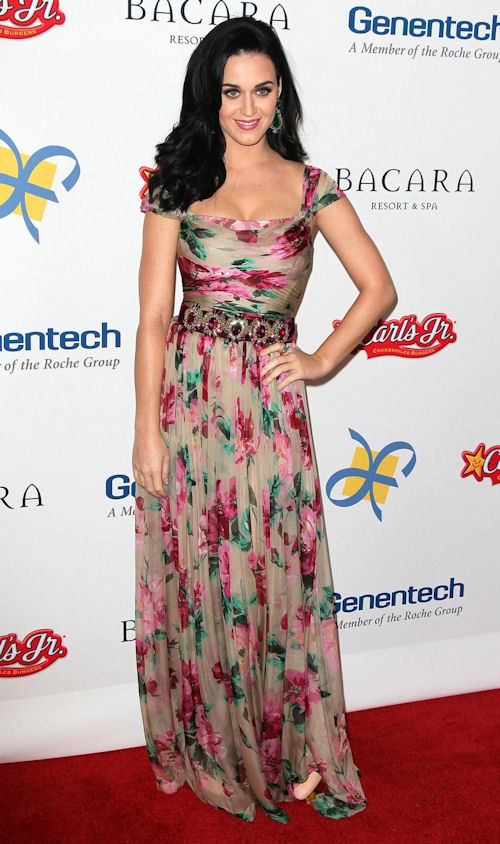 Floral prints have always been one of Katy’s favorite. The silk chiffon, flowy dress works brilliantly at the Dream Foundations’s Celebration of Dreams Gala (Dress: Dolce and Gabbana).

As another bright-inspired, post-#teenagedreamera dress, Katy’s orange dress here is a hard look for most figures to pull off. The backless gown and small train gives Katy a few more inches in terms of height, allowing the Queen to strike poses left and right at the  2013 MusiCares Person of the Year Gala honoring Bruce Springsteen (Dress: Alexander McQueen).

For the 2013 Kid’s Choice Awards, Katy goes for a more playful red carpet look, paired with a true adult’s attention to detail. The tube top and matching high-waisted, printed skirt is one of Katy’s most talked about looks to date, but she turns the volume up a few notches further with the Christian Louboutin #redbottom pumps, a shoe she’s never been photographed in until now (Dress: Hervé Léger Pre-Fall Collection).

Bedazzled looks are another of Katy’s specialties, as she pairs a paisley print pearl dress with a cutesy peach handbag. Being nominated as a role model for gay, lesbian, and transgender youth at the yearly Trevor Project gala, Katy’s look ups the standard for stars stepping out for paparazzi (Dress: Marchesa).

For the UNICEF annual SnowFlake Ball, Katy gives her interpretation of goth glam in this long dress with a bolero cape. The matching snowflake earrings are just a small homage to the event’s theme, while the blue and black color scheme works wonders for her tanned skintone (Dress: Naeem Khan).

The MTV Video Music Awards is possibly one of the biggest platforms for musicians to express their true sense of fashion. Katy rocks a very long print dress with dark and light shades to bring out her piercing eyes. The long, dramatic train adds a bit of flair and high fashion to the look, and even received the ‘Best Dressed’ award via E! News’ ‘Fashion Police’ (Dress: Elie Saab Couture).

Probably the most memorable of Katy’s looks during 2013 thus far is her 2013 Grammy dress, which had #thegirls at full attention despite a newly enforced dress code. The mint green dress with a bedazzled neckline is somewhat simplistic in nature, but it fits Katy like a glove, proving no other female musician could have a figure like hers (Dress: Gucci).